Welcome to our new weekly roundup of what’s happening in Social Media. We promise to keep it short and sweet, because if you’re anything like us, you have a ton of stuff to get done and little time to do it.

It’s been a crazy busy week in the world of social media during week one of 2017.

Facebook had big news about its Facebook Live features for Mentions. Facebook Mentions enables public figures to easily connect with their audience, and a key way is by sharing video. The new update allows greater moderation of comments on a public figure’s video, which makes live broadcasts friendlier and safer for everyone (none of those naughty words will show up!).

Also, broadcasters have a ton of new controls, allowing them to flip the camera, adjust brightness, and do things like showcase text or sponsor logos. Our favorite new feature is the Team Prompts, where teams can post descriptions and schedule reminders for the main user (public figure) to review before going live.

Then there’s trimming, which lets broadcasters trim dead spots from the beginning or end of their video to make the rebroadcast version look more polished.

According to Benjamin Mullen of Poynter, Twitter has confirmed that the verified symbol will appear in additional places across their platform. We immediately found it on the timeline as soon as we search for the hashtag #CNN, since more reporters tend to have verified accounts. 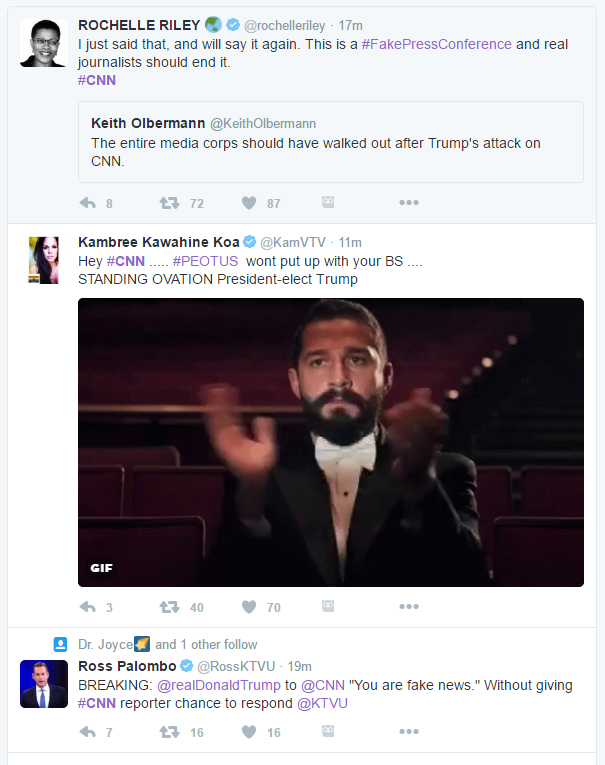 We know a lot of folks were devastated when Twitter announced Vine was shutting down. Where would all those six second videos of your cat yawning go? This week, they announced that Vine is being replaced with Vine Camera on January 17. Users will still be able to create those little snippets of videos that loop endlessly and share them on Twitter, or download them to their smartphones. If you’ve grown attached to those old Vine videos, you have till January 17 to download them, otherwise they’ll be lost forever!

In an attempt to stay competitive with Facebook and Youtube’s 360 features, Periscope released their own version. Users can now watch live 360-degree broadcasts on both Periscope and Twitter. Any video that has a LIVE 360 badge will allow users to swipe their screens and change their point of view.

The feature is being tested with If you want to jump on the 360 bandwagon, you can apply here.

I'm on the subway with NO PANTS #npsr #periscope360 #nyc https://t.co/ZsftiSZjeQ

This week, Instagram co-founder Mike Krieger announced , users of the iPhone 7 or 7 Plus can now get wide color capture and display in their app. Users can also post GIFs to Instagram Stories and convert them into Boomerangs even if they didn’t shoot them with the app.

According to TechCrunch, “Snapchat wants you to play with your face, not just take pictures of it.” Snapchat confirms this is the launch of a new, native games feature. The newest “Santa’s Helper Lense”, is perfectly integrated into lenses, so that users are surprised with the game without having to search for a new feature.

Everyone said that 2016 would be the year of streaming video, but from the looks of it, 2017 my beat last year for that title. We are watching a heck of a marathon of live video feature roll-outs. It will be interesting to see who makes it to the finish line and wins the coveted title of top live video platform.

Have you tested any of these updates? Which one is your absolute favorite?

This site uses Akismet to reduce spam. Learn how your comment data is processed.